Architectures of data storage, posthumous social media, human composting. I Was Once Here, I Might Still Be explores the thresholds between remembrance and presence, abstract thoughts and embodied experiences, rituals of living and radical death care.
The installation weaves an ambiguous network among: a hand woven burial shroud; moments of #HavingAGoodTime captured as Instagram posts as well as the data infrastructure that host them; stranded, disembodied, vibrating neurons that can no longer produce or retrieve memories; a pot of human compost soil; micro green sprouts that grow out of this dead person’s soil; the soil’s ongoing dream of its human as sprouts.
Composting a human body after death, instead of embalming or cremating, is now a legal death care option offered by a handful of commercial agencies in four US states. The body will go through a month-long natural organic reduction process and turn into roughly one cubic meter of compost that supposedly is earth friendly. One would need a truck to transport the resulted human compost. Some composting service package includes donation of the compost to deep mountain forest should the families choose not to collect.
While the idea of letting one’s body - or one’s loved one’s body - naturally decay might be appealing to some, to others it can feel grotesque, indignifying or unorthodox. Some feel that human composting makes us less human. Others think it lacks in ceremonial qualities in commemorating the dead and destroys senses of eternity a tomb stone or traditional funeral could offer.
All of these feelings surrounding rituals of death care are deeply personal, likely rooted in our attitudes towards the idea of living, towards preserving and prolonging our own embodied experiences as living, breathing, thinking human beings. How and what do we hold on to to claim ourselves as humans? How do we prove that a person’s life in passing has been witnessed, documented and remembered, perhaps even made a difference, as time continues to lapse in scales and speeds beyond human perceptions?
Camera-ready smartphones and the abundance of social media today are changing how we define, experience and share memorable moments among ourselves and with others. Digital recordings of memorable moments are increasingly accessible, hyperreal, and self-evident. Experience no longer has to be fully lived, memorized and later recalled by embodied individuals; instead, it can exist only to be digitally recorded for social media, accessed by others, and hosted on cloud servers for an indefinite amount of time, perhaps even outliving the person who recorded it.
It is hard to estimate how much digital storage one would need to host a life worth of experiences and memories as data. Even harder to analyze how much of these data representations can be perceived as duplicates or redundant copies of the same real life events (think music festivals or Mona Lisa), especially when data is detached from their humans. As we continue to dump image and video representations of our everyday lives onto the cloud, tech companies who hold our memories hostage are expanding their server farm constructions into remote locations and natural habitats such as Greenland. On the contrary, on the biological level, our memories are formed and retrieved when the brain neurons form contact with one another. As the brain decomposes or gets cremated, memories held in our human bodies will perish. Rituals of death care are our attempts to seize and re-ground the fleeting traces as the dead vanishes.
I Was Once Here, I Might Still Be comprises multiple sculptural vignettes loosely gesturing towards one another. Upon entering, visitors are presented with four sets of documents to ground them in context: Washington State human composting quality guide; sample package and pricing breakdown for human composting service; Instagram guide on handling dead people’s account; Meta’s sustainability statement for their data centers.
At the center of the installation, under a pool of saturated magenta color light, is a basket of compost soil outgrown by salad-ready micro greens. One may project onto or seek out from the plants back and forth transformations between death and  living, ending and beginning, decaying and nourishing. A digital photo frame sits next to the plants. Decorated with a black silk ribbon, the photo frame displays slowly morphing images of a human figure emerging from sprouts. I fine-tuned a StyleGan NADA model that will turn human images into sprouts; taking sensor readings from the soil as inputs, the model generates images of an imaginary human as the their soil nourishes plant growth. The soil sensor readings are also used to generate low frequency sound waves to animate four hanging neuron sculptures, creating faint vibrating noises. The neurons are hung far apart, restless, but have no chance of coming into contact with one another. No memories can be produced, stored or retrieved among them. A handwoven burial shroud hang as the backdrop, outlining a body sized surface area in the air. Projected onto the shroud are images of instagram posts tagged with #HavingAGoodTime, as well as satellite images of the Meta data centers where these posts might be stored. 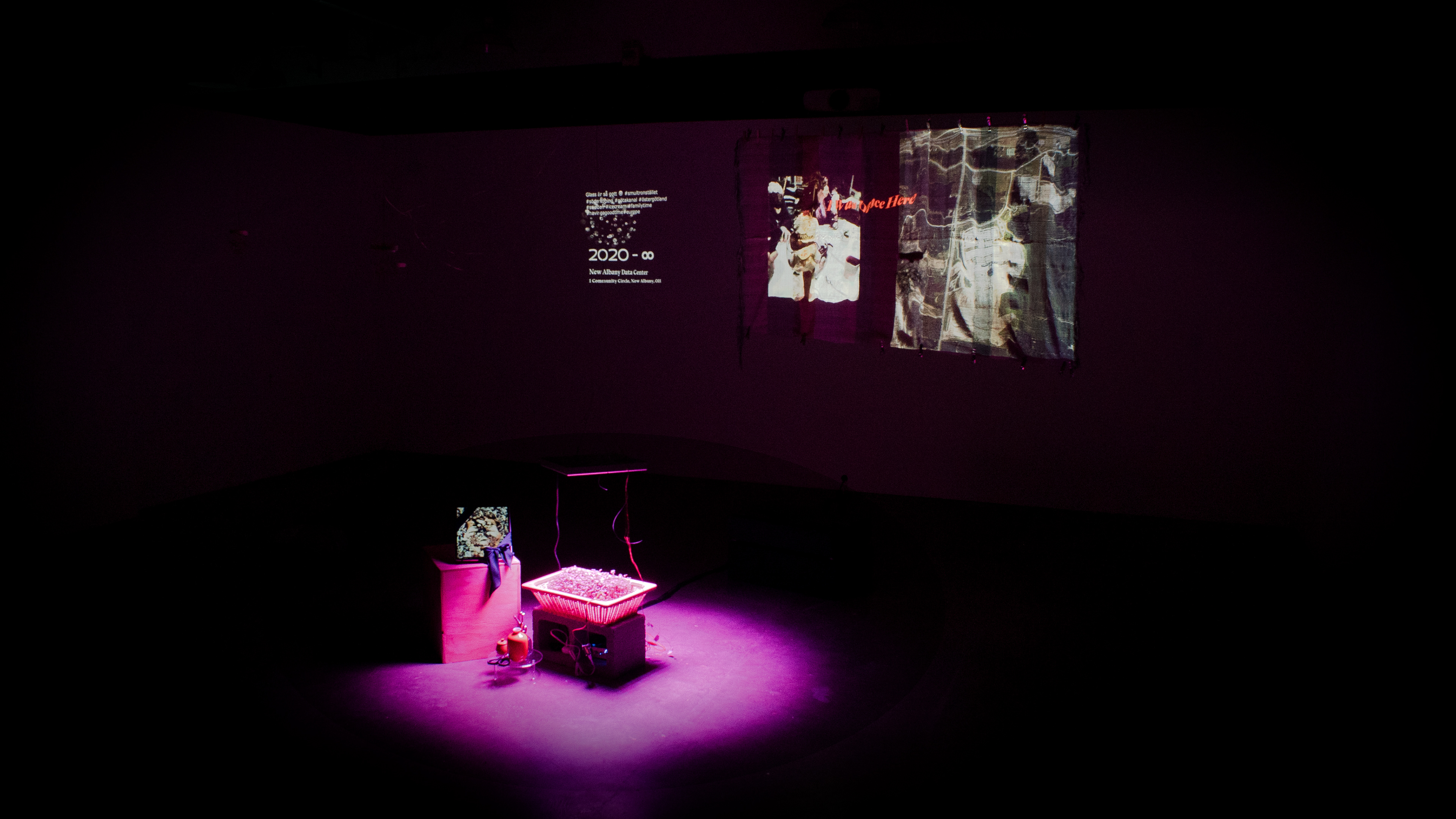 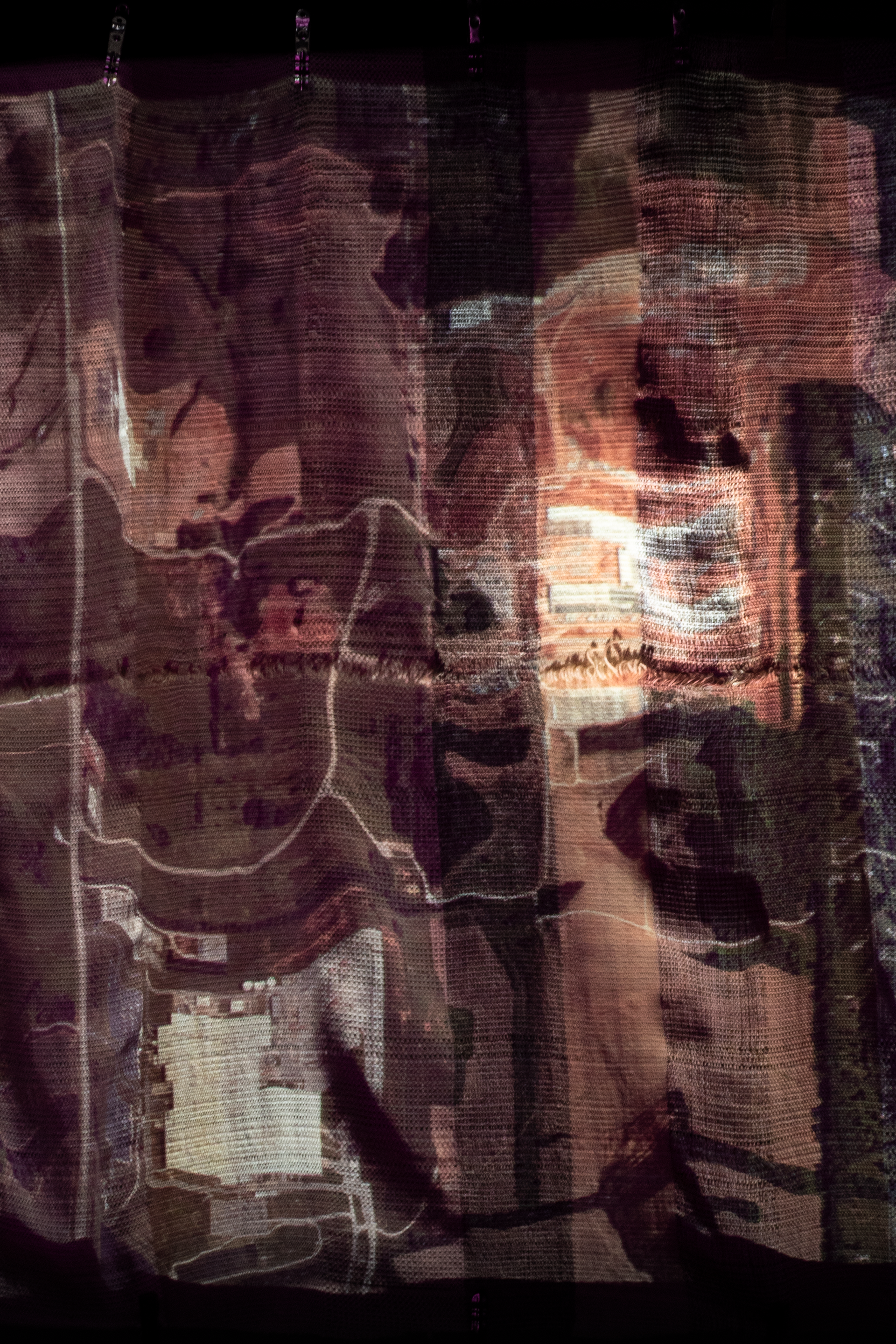 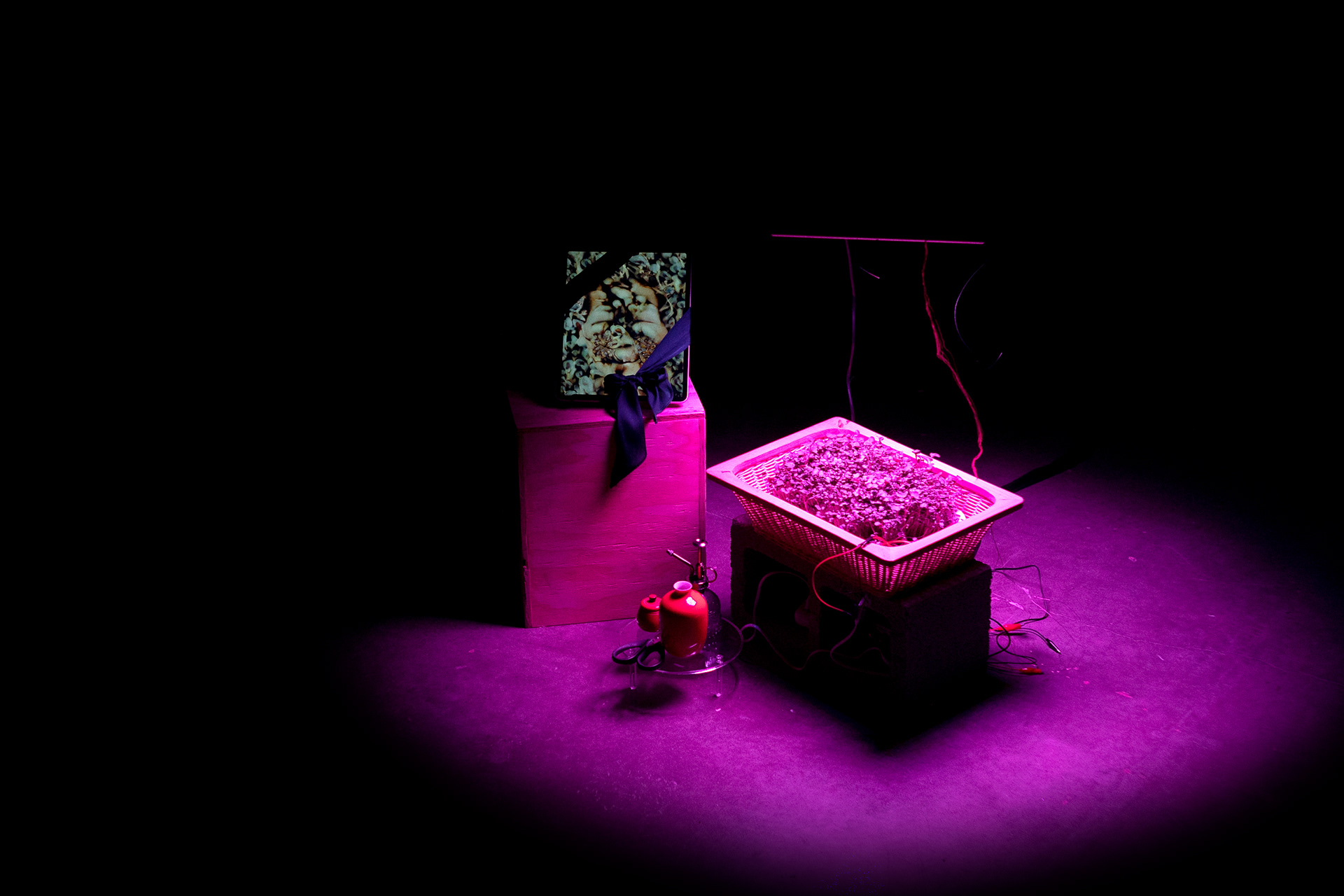 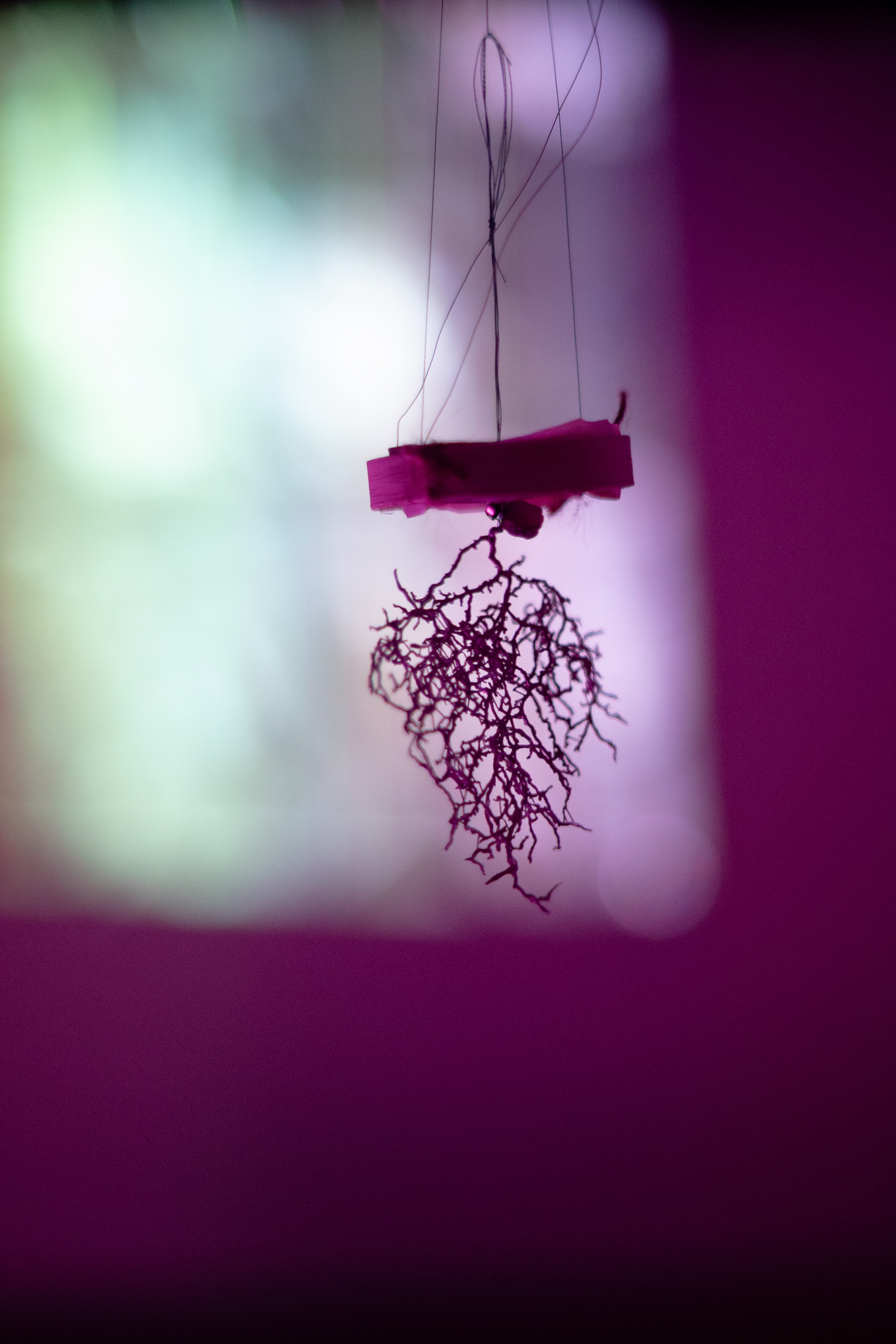